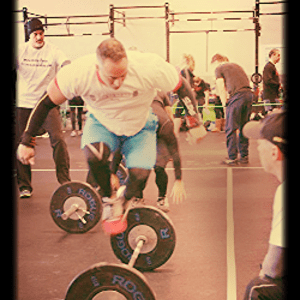 I came to Atlanta from Thomasville, Ga to pursue my education and training as a chiropractor. After coming to Atlanta, I was fortunate enough to be invited to join a group of world class powerlifters and train at Coffee’s gym in Marietta. While there, I was able to have decades of training wisdom passed down to me from 5 world champions, including 3 legends of the sport, and numerous national level competitors. I was ranked by Powerlifting USA as a top 5 165lb lifter with a 688lb squat, 490 bench press, 628lb deadlift.

After a torn ACL caused while playing flag football, I stopped working out for about three years. Out of shape and depressed, I was introduced to Crossfit in 2006 by my Chiropractic partner, Dr. Eric Richards. I literally saw Crossfit grow as a community from our office. He never gave up on me and I started crossfit in 2009. Skeptical at first, I saw it change many lives and give people the zest to lift that I once had. People who had never even lifted weights, or worked out before, were talking to me about deadlifts. Once I committed to start, it humbled me, built me up, and then changed the way I viewed fitness forever.

Crossfit is for everyone because fitness and a healthy lifestyle is for everyone. I’ve seen people with prosthetics, people with missing limbs, 70 year olds, children, and elite athletes do it and love it. It literally is the best way to fitness that exists.

We'd love to send you information about our pricing

Enter your Phone Number in the field below and we'd be happy to show you our rates and explain them in detail!